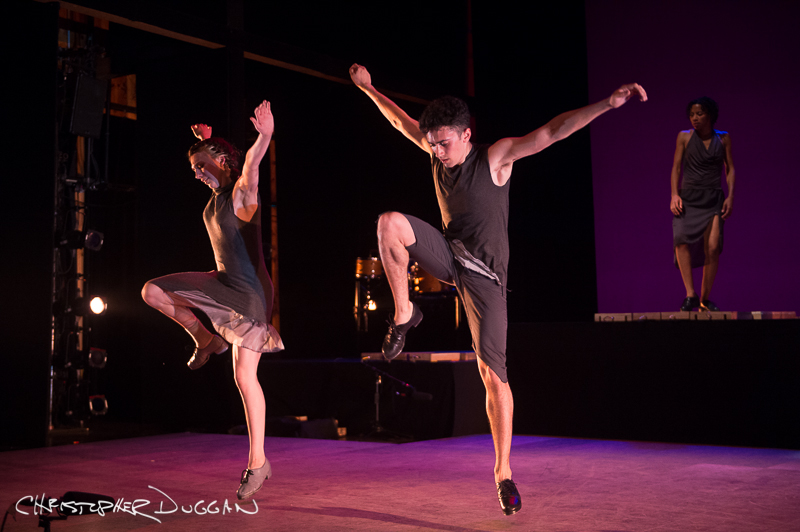 Michelle Dorrance / Dorrance Dance is here at Jacob’s Pillow Dance Festival for a special two-week run. Her show is ah-mazing. It is so creative and innovative, really something unlike anything I’ve ever seen before.

Michelle won the Jacob’s Pillow Dance Award and performed at the festival last year, and Nel and I interviewed her for the video above. I know Michelle has a background in theater – she danced in STOMP for quite a while – and her show wasn’t just tap. She brings a lot of other sound elements into it. I just kept thinking, “Where’d it all come from?” The mind of an artist, making something out of nothing. I was wowed.

The performance is super high energy and uses new kinds of technology. It all worked well together. Both performances at Jacob’s Pillow this week have a wow factor, but each is a different kind. Dorrance Dance performed something you haven’t ever seen before. And Daniel Ulbricht/BALLET 2014, a series of ballet works by incredible New York City Ballet dancers, contains a lot of dances we have seen before, but better than you’ve ever seen them performed.

BALLET 2014 has been really fun to photograph, because my wife Nel & I have worked with many of these dancers at the Vail International Dance Festival, in New York City and with American Dance Machine. It’s fun to be working with people who we’re friends with, and a joy to work with such world-class dancers.

Nel and I filmed an interview with Tiler & Robbie for Jacob’s Pillow, asking them how it is to dance on a stage with such a rich history. They’re excited to leave their mark here at the Pillow, too. Are you subscribed to Pillow TV? You should be.

Nel and I have interviewed Tiler & Robbie before. Nel actually made a film featured with a Vanity Fair magazine article last year. It’s a great video. We’ve also worked with Gina Pazcoguin and Daniel Ulbricht through American Dance Machine. Their performance of Mr. Monotony is fantastic, and Nel captured them in the making of it.

This year, more than ever, it feels like there’s all of this crossover and collaboration with our work based out of New York and here at Jacob’s Pillow. It’s great to have built these relationships with the dancers and dance companies, because it makes us all more comfortable during interviews and adds a deeper understanding when we’re filming and photographing them anywhere.

Cincinnati Ballet | Dance Premiere at The Joyce in NYC